Micro-organisms are microscopic organisms which are either single celled or multicellular. The study of micro-organisms is called Microbiology, in which a subject has introduced with the discovery of micro-organisms by Antonie van Leeuwenhoek. Micro-organisms live in every part of the biosphere including soil, hot springs, rocks, deep underground, deepest sea or ocean and high in atmosphere. Microorganisms act as decomposers and are crucial to nutrient recycling in ecosystems. 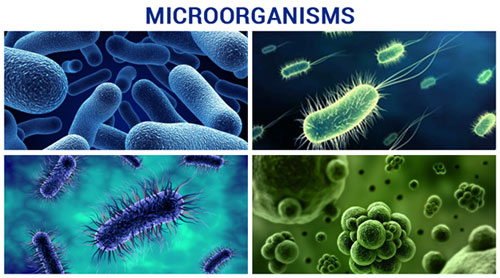 Microorganisms can be classified into five types which are furnished under:

Protozoa are mostly aerobic and eukaryotic organisms. They are neither plants nor animals and make up a large group of organisms in the world in terms of biomass. Protozoans like Euglena depend upon plants to prepare their own food and are called as autotrophs while some other protozoans like Amoeba depend on others for their food which are called as heterotrophs. Some protozoans are parasitic which cause diseases to human beings while others are unicellular or colonial and move around using flagella or pseudopodia.

Viruses have a very simple structure and is the smallest micro-organism discovered and is not considered as a living organism which consists of DNA & RNA and a protein coat. They have crystallization ability and can capture living cells and reproduce on them.

Fungi are made up of eukaryotic cells and are heterotrophic and are dependent on organic nutrients to obtain energy and carbon compounds. Fungus may be single-celled or multicellular and are arranged in filaments called hyphae. Example of unicellular virus are yeasts and multiples of hyphae are called mycelia. Some fungi are parasites and cause diseases to humans, animals and plants and some other are used in food production units and pharmaceutics.

These are unicellular as well as multicellular containing both prokaryotes and eukaryotes. These are typically photosynthesisers and are found mostly in marine environments. This prokaryotic algae is also called as blue-green algae and are essentially aquatic plants.

Bacteria is defined as a unicellular organism and their cells contains cytoplasm. Bacterial has a cell wall formed with protein called mucopeptide. Bacteria cause harmful diseases having gelatinous cover around the cell wall and cause reproduction which is similar to specific type of algae and is done through spores and binary fission.  Bacteria is classified into 5 types according to nutritional habits which include:

Microorganisms are present in various food products and sometimes they cause harm and sometimes helpful. Let’s look for different micro=organisms present on food.